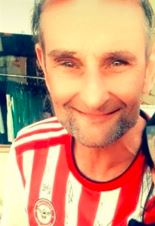 David Johns, aged 55, from Shanklin, was pronounced dead at the scene.

His family have released the following tribute to him: Dad was Brentford’s Number 1 fan. He was a great dad, grandad and brother. We will miss him very much.

As part of this investigation a 36-year-old man was arrested on suspicion of murder and remains in custody having been treated for serious injuries sustained during this incident.

Police continue to ask the local community not to speculate on the circumstances surrounding this incident, and encourage and concerns or information to be reported directly to police on 101, quoting 44220162095.