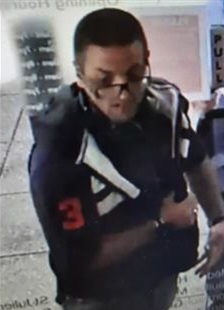 At approximately 3.20pm on Thursday 19 May a man entered the Majestic Wine store on Park Road South and attempted to leave the store with a bottle of Champagne that he had not paid for.

When approached by staff the man became threatening and assaulted a member of the public, a man in his 80s, causing minor injuries to his arm. The man’s watch was also taken during the incident.

Police now have this image of a man, seen in the area at the time, who they would like to speak to in connection with this incident.

Wearing dark rimmed glasses and a black coat with a number 3 logo on the upper arm.

Do you recognise the man pictured? Were you in the area at the time and remember seeing what took place or the moments afterwards?

Anyone with information is asked to call 101 quoting 44220198102. Alternatively, go online and submit information via the following form: https://www.hampshire.police.uk/tua/tell-us-about/cor/tell-us-about-existing-case-report/