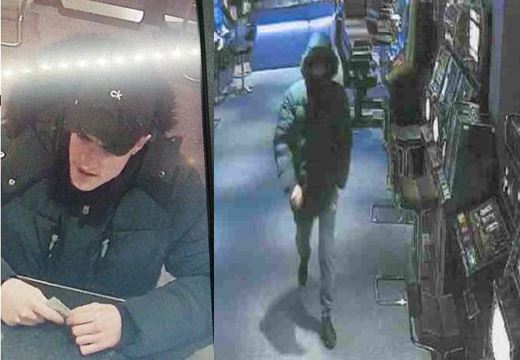 Police have been investigating a robbery attempt which took place in Fareham town centre, and are now in a position to release some CCTV images to the public

Between 7.35pm and 7.45pm on Wednesday 23 February, a man entered Golden Touch on West Street and threatened a member of staff whilst demanding cash.

No money was handed over and the man left empty handed.

Officers have been investigating this incident, and are now releasing two CCTV images of a man that police would like to speak to as part of their enquiries.

Police officers appreciate that the images are not the greatest quality – but believe it is the same man in both images and hope someone may recognise him or the clothing he is pictured wearing.

The man is described as white, aged in his 20s, around 6 ft tall, skinny, and wearing a black padded coat with a furry hood, and grey tracksuit bottoms.

Do you recognise him? Did you see him in the area around this time, or do you know who he is?

Anyone with information is asked to contact police on 101, quoting 44220075941, or you can submit information to us via our website here: https://www.hampshire.police.uk/tua/tell-us-about/cor/tell-us-about-existing-case-report/