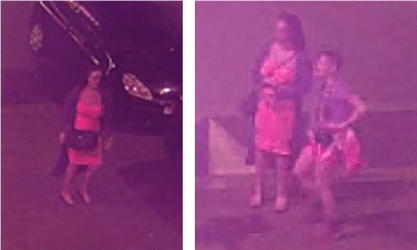 Officers have released CCTV images of two women they would like to speak to in connection with two assaults that took place in Southampton.

The incidents took place between 10pm and 11pm on Saturday, 28 August.

A 31-year-old woman was standing next to the entrance to East Park in Southampton, when she was approached by a group of around 5 or 6 people.  A woman from the group walked up to the 31-year-old and punched her, knocking her to the ground. The group then continued to assault the victim whilst she was on the ground before walking off.

Following the assault, the victim walked to Mettricks in Guildhall Square where she received assistance from staff.

She then went outside to sit down and was approached by the same group, who carried out a further assault against her.

During the incidents, the victim sustained bruising and cuts to her face, arms and hands and a fractured wrist.

Officers have been carrying out a number of enquiries to try and identify the two women in these images but are now asking the public for help.

Police appreciate the images are not very clear, but do you recognise them?

Perhaps you have some information that could help police identify those involved?

Anyone with any information is asked to call 101 or report online at https://www.hampshire.police.uk/ , quoting crime reference number 44210344562.

Alternatively, you can contact Crimestoppers anonymously on 0800 555 111 or online at https://crimestoppers-uk.org/