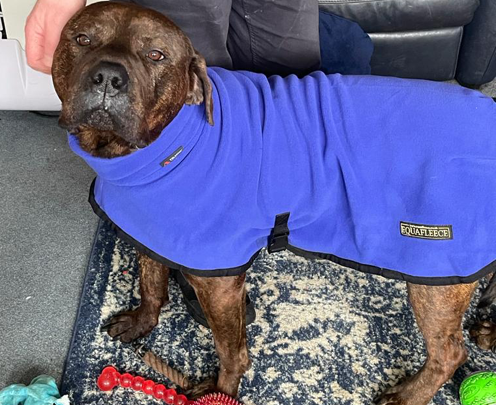 An emaciated dog, who was just hours from collapsing before he was rescued by police, is back with his tail wagging after finding a paw-fect new home

The incredibly poorly pooch was discovered by officers when they executed a search warrant at an address at the Winklebury Centre, in Basingstoke, on Monday December 20, 2021, as part of an ongoing drugs investigation.

During a search of the property, the neglected dog was found locked inside a bathroom, with only water from the toilet to drink.

Dog Handler, PC Stacy Beale, said: “When the Rottweiler cross, who has now been named Bailey, was found he was very weak and emaciated with just toilet water to drink and no food. We believe he had been there for at least three weeks and was slowly starving.

“He was taken straight to our police kennels and then to the emergency vets. He was assessed as having a body score of 1 out of 9, with vets stating he was probably hours from collapsing.

“A decision had to be made on whether it was best to let Bailey slip away in his sleep or fight to keep him alive. There was no owner available so I had to make the call. This was an easy decision as this dog only had to look at you, his eyes were still sparkling and he had not given up yet, despite the cruelty he had suffered.

“Due to his critical condition and long term intensive care required, contact was made with a lovely lady called Georgie at Rottie Rehab. She kindly agreed to help Bailey and by the following morning had secured a foster placement willing to nurse him 24 hours a day. It really was touch and go, but with four hourly feeds, Bailey started to respond and gain weight and condition.

“Over the following weeks he went from strength to strength and started to play and come out of his shell.

“We managed to trace his registered owner who had given Bailey to a friend as he could no longer care for him. After hearing that his friend had abandoned his dog, he agreed to surrender him for rehoming.

“He has now been rehomed and is loving life with his new family.”

Officers wish Bailey all the best in his new fur-ever home!

The warrants were executed alongside three other warrants at the Winklebury Centre on the same day.

A 30-year-old man (from a separate address to the dog), from Basingstoke, was arrested on suspicion of being concerned in the supply of a controlled drug of class B and acquiring, using or possessing criminal property.

He has been released under investigation.