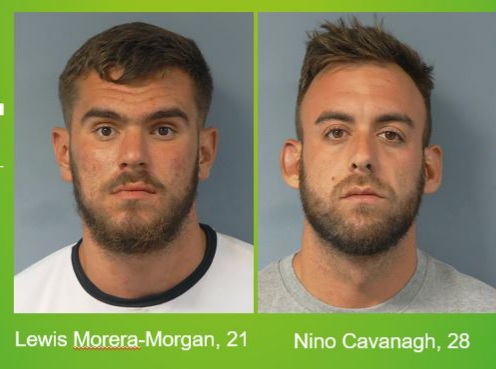 ‎Two men have been jailed for violent offences on the Isle of Wight.

The pair had been charged in connection with an incident which took place at an address in Albert Street, Ventnor, on 20 June this year.

A 43-year-old man, who was known to Cavanagh and Morera-Morgan, was assaulted by Morera-Morgan at the address, resulting in him being admitted to hospital with serious injuries to his head and face, including fractured eye sockets and perforated ear drums.

During this incident, Cavanagh stole some of the man’s personal belongings.

In a separate incident, on 29 July this year, police attended an address on Lowtherville Road in Ventnor to conduct a search. Cavanagh and Morera-Morgan, who were inside the address at the time, climbed up onto the roof and started shouting abuse at police.

Cavanagh threw concrete blocks at police, and over the course of three hours both defendants continued to break bits of material off the roof to throw at officers.

A car parked near the address sustained damage as a result of being struck by missiles thrown by the two defendants.

They were eventually arrested and charged with affray and criminal damage, which they both admitted at a previous court hearing.

Cavanagh, of Kestrel Way in Carisbrooke, was jailed for 18 months.

Morera-Morgan, of Trinity Road in Ventnor, was jailed for 23 months.

Both men were also made subject to a five year restraining order in relation to the man who was assaulted at the Albert Street address.

Following the sentencing, DC Ross Jones said: “These were violent offences which saw a man hospitalised with serious injuries, and also saw the safety of police officers put at significant risk by the defendants’ animalistic behaviour.

“There is simply no place in society for this kind of behaviour, and I’m pleased that the work of all officers involved in investigating these incidents has now resulted in both men being put in prison where they rightly belong.”