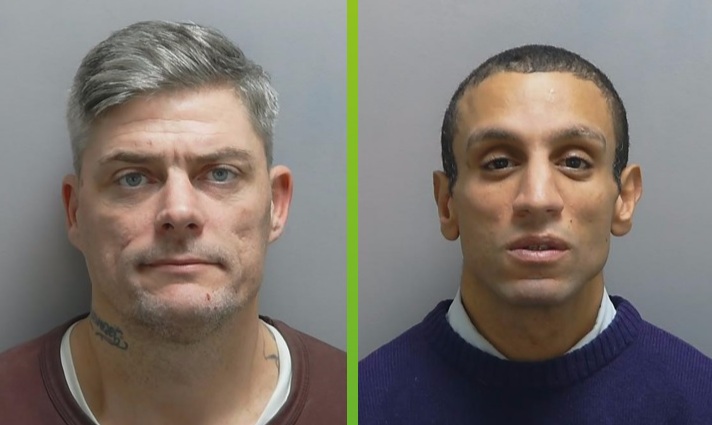 Fahad Abbas, 39, of Haslemere Road, Southsea, and Benjamin Coates, 38, of Abrams Way, Havant, appeared at Portsmouth Crown Court today (Thursday 3 February) having previously been charged with burglary following an incident at an address on Twyford Avenue.

It was reported to police that between 7.35pm and 8.50pm on Monday 1 November, entry had been gained to a flat and jewellery worth approximately £2000, £300 in cash and a folding knife had been taken.

An investigation was launched by Hampshire Constabulary’s Eastern Operation Hawk team, which specialises in burglary, and Abbas and Coates were identified from CCTV footage and arrested.

Officers also analysed footwear marks at the scene, later confirmed to have matched trainers recovered from Coates on his arrest. Both men were subsequently charged with dwelling burglary and remanded into custody.

Both men were today sentenced to two years and 21 weeks each in prison.

Detective Constable Hannah Mosely of Operation Hawk, who led the investigation, said: “Dwelling burglary is an extremely distressing crime and the impact it has on its victims must not be understated.

“I hope this investigation and prison sentence reassures our communities that we will do everything possible to support victims of dwelling burglary and bring offenders to justice.

“We would urge anyone who has been the victim of dwelling burglary or has any information on burglary and stolen goods to contact us on 101 or via our website.”

For our advice on how to keep your home safe from potential burglars, visit our crime prevention page: https://www.hampshire.police.uk/cp/crime-prevention/protect-home-crime/