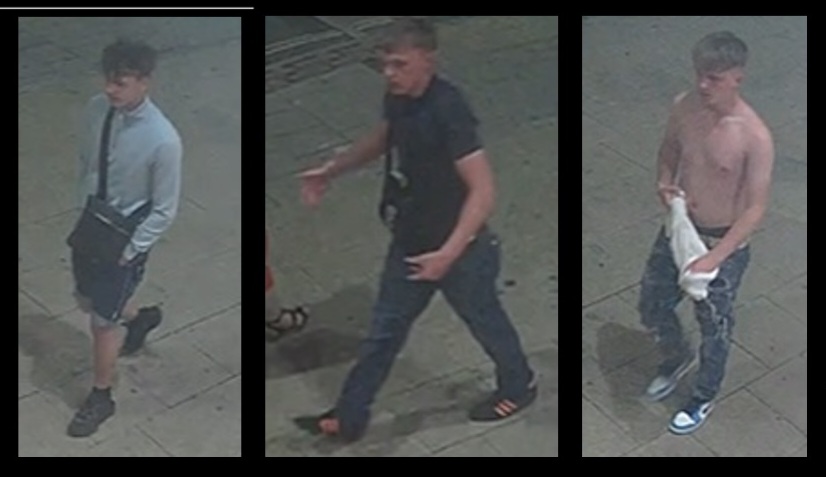 It was reported to us on Sunday 19 June that an 18-year-old man was located shortly before 3am on the zebra crossing on Station Street by Portsmouth & Southsea Train Station, leading on to Commercial Road, with significant injuries to his face.

He was taken to hospital with two fractures to his face, bruising and swelling, and a small bleed to the brain. He has since been discharged.

Police have previously appealed to the public for information in connection with this incident and since the initial appeal have been following all lines of enquiry available to them to establish the circumstances of how the man came to be injured.

Officers now have these CCTV images of three men, seen in the area at the time, who officers would like to speak to in connection with this incident and would like to hear from them or anyone who recognises them.

The first man is described as:

Brown, possibly curly, hair which is longer on top and short around the sides

Wearing black trainers, dark shorts with possibly a white pinstripe on the side, and a light blue long sleeved jumper with a zip at the top. He was also carrying a black man bag over his shoulder with a silver zip.

The second man is described as:

Light brown hair which is short around the ears and goes into a gradual fade, with long hair on top.

The third man is described as:

Dark blonde/brown hair, which is long on top and short on the sides

Wearing white and blue trainers with a black tick, possibly Nike, and black laces. Also wearing dark blue jeans with rips and frays and a white t-shirt, although he was seen to not be wearing a shirt shortly before the time of the incident.

The victim is believed to have travelled from Catherine House on Stanhope Road towards Portsmouth & Southsea Train Station at approximately 2.30am, before later being found unconscious by a member of the public.

Police would like to hear from anyone who recognises the men pictured or has any information that may assist their enquiries.

Anyone with any information is asked to contact police on 101 quoting reference 44220243448 or online at https://www.hampshire.police.uk/tua/tell-us-about/cor/tell-us-about-existing-case-report/